In fall of 2007, the city put out a call to artists from Sandoval County to submit their ideas for a piece of public art that could be created and added to Rio Rancho’s new City Hall. The intent of the Request for Proposal (RFP) process was to add a piece of art to enhance the visitor’s experience while at City Hall.
Artist Jaymes Dudding's proposal titled Chaco Rising was selected by a committee from among six proposals submitted.

Chaco Rising represents a modern interpretation of the ancient Sun Dagger Solar Calendar at Chaco Canyon. Between 900 and 1150 AD Chaco Canyon, located in northwest New Mexico, was a center of culture for ancient Pueblo people. Dudding’s piece recreates the phenomena of the Sun Dagger petroglyph, which during the summer solstice, created a single band of light that bisected the center of a rock spiral. Additional light fell on a nearby petroglyph that marked the spring and fall equinoxes. Only recently, for unknown reasons, has this regular occurrence ceased to exist.

In addition to the piece of public art, four informational plaques surround the structure and provide markers for North, South, East, and West. 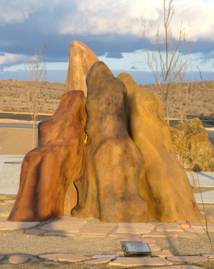 Sun Mask by Don Redman has sculpture components made of two Corten steel structures with a base of emerald colored glass. Redman’s concept for Sun Mask utilizes the abundant sun in Rio Rancho to illuminate and filter through the pieces. Redman sees the sculptural forms as abstractions for growth and abundance as the City continues to ‘bloom’ throughout the area.

The project was made possible by the state of New Mexico’s Arts in Public Places (AIPP) program. This program (1% for the Arts) was applied to state-supported capital expenditures made related to the construction and operation of the Hewlett-Packard building located in Rio Rancho’s City Center area, which includes City Hall. A total of $73,500 was made available through the program and utilized on this project. 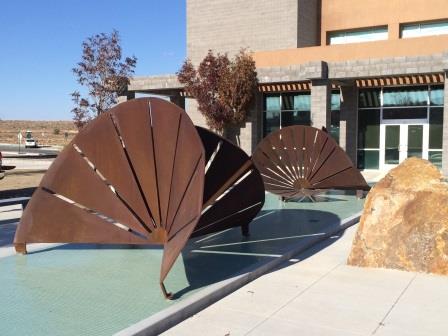