In the early 1960s, the AMREP Corporation purchased 55,000 acres of land on the outskirts of Albuquerque, originally called Rio Rancho Estates. This was the beginning of Rio Rancho.

AMREP marketed the area to residents in the Midwest and eastern states. When home building began in 1962, many of the first residents were middle-income retirees. In 1966, the 100th family moved to Rio Rancho and by 1977 the population had grown to 5,000. In 1971, AMREP purchased and platted an additional 35,000 acres. Rio Rancho Estates was now 92,000 acres and larger, geographically, than the city of Albuquerque.

The vegetation within the plan area is predominantly characterized by the “Upper Sonoran” zone (elev. 5,000’ to 7,000’) as an open mesa environment dominated by a wide variety of grasses, yucca, sagebrush and cholla cactus. There are a few one-seed junipers located within the plan area.

The terrain generally slopes from 5,755’ in the northwest to 5,575’ in the southeast with two hills defining the south and southwestern corner of the plan area. The geology and soils located within the plan area is associated with the Albuquerque Basin comprising a 4,300 square-mile region. The plan area sits upon several hundred feet of sediments; gravels, sands, sandstones and mudstones. 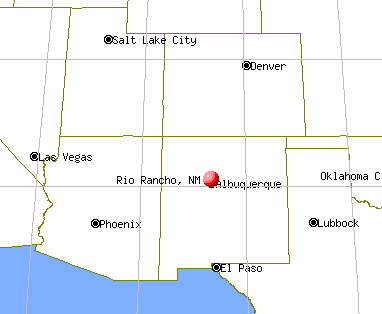